Two questions crossed my mind as I strolled into East Norriton’s Retro Fitness on Monday afternoon, fully prepared to have my butt whooped: How does someone train to climb a mountain in a place like Philadelphia? And how on earth did Preston and Steve Show producer and on-air personality, Nick McIlwain, who once busted his Achilles on the dance floor at a wedding, get roped into climbing the tallest mountain in Africa?

But as I followed his trainer, Nick Rueger, to the gym floor and caught a glimpse of McIlwain’s face, already glistening with sweat as he worked his arms on a weight machine, I realized this was no time for questions. I hopped on to the elliptical for a quick warm-up. It was time to get to work. 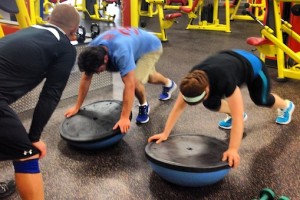 Rueger set up stations for a circuit workout. First it was 20 squats on the bosu with a medicine ball overhead, followed by 15 seconds of mountain-climbers (why not?!). Next we did 20 weighted rows in a squat position, and I got in 12 (girly) push-ups while McIlwain did 15 or so high jumps onto a platform. Then I did the jumps as McIlwain did his push-ups (they were real ones, I checked). “One down, seven to go,” Rueger said. We completed the circuit eight times.

The conversation loosened as the endorphins began to flow. “So how exactly do you train someone to climb a mountain?”  Read more here… http://blogs.phillymag.com/bewellphilly/2012/07/24/it-nick-mcilwains-mt-kilimanjaro-workout/