PHILADELPHIA, PA.; May 15, 2012 (WPVI) —    Carl Kapes and Nick McIlwain of WMMR 93.3FM  didn’t even know each other till recently. But they are about to share a once-in-a-lifetime experience.

Kapes is going to extreme heights to raise research money for the disease affecting his children. And McIlwain, a personality on the Preston & Steve morning radio show, accepted the challenge to go with him.

His sons Ryan and Braden have the disease, which causes enzymes to build up in the brain.

When his sons were diagnosed,  Kapes shifted into activist mode, trying unique avenues to raise research money on Sanfilippo syndrome. He won $500,000 in a Pepsi Challenge, and a $250,000 grant from Vivin. So far, he & other parents raised nearly a million dollars.

And Kapes is continuing the offbeat approach:

“Because the syndrome my children suffer from is so rare, and there’s so many good causes out there, it’s very difficult for me to get people involved because so few people are affected. So i needed to do something completely different to stand out,” he told us today. 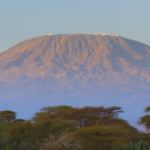