Tennessee dad had a gut feeling that he could train the shepherd to help his son. 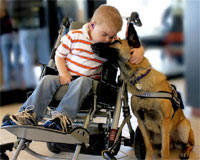 As nearly anyone who has adopted a dog or cat from a shelter can attest, there’s something special about a rescued pet; it’s as if the animal senses he’s been given a second chance at life. That’s certainly the case with Juno, a Belgian Malinois who was rescued from a shelter just days before she was to be euthanized. But since coming to live with her family in Alcoa, Tenn., Juno has taken on the role of rescuer to four-year-old Lucas Hembree. Lucas suffers from Sanfilippo syndrome. Read More